If you’re trying to figure out how to bypass reduced engine power correctly, this is the article for you.

If you’re experiencing this issue you’re in the right place. We’re going to take you through what causes reduced engine power and how to bypass this setting. If you can’t fix the problem on your own we recommend taking your vehicle to a mechanic. Read on to learn more.

What Is Reduced Engine Power?

Reduced engine power is a method of reducing power from an engine. In short, it makes an engine operate below its maximum power output.

When an engine is in reduced power mode, vehicles won’t move as fast and acceleration is greatly reduced.

Reduced engine power is also a mode that’s specific to General Motors (GM) vehicles. Some common brands that use engines from GM include Chevy, Buick, and Pontiac.

When a vehicle enters reduced engine mode the car’s computer (ECU) cuts power to the engine and wheels. During this process, the driver is also altered to several problems with the engine. In many cases, the check engine light and other lights may appear on the dashboard.

It’s also important to note that some vehicles have a similar feature as reduced engine power but it’s called limp mode.

Limp mode is a security feature in modern vehicles. When there is a problem with the engine or transmission, the vehicle cuts power to the engine to prevent further issues.

Limp mode can be caused by overheating, wires, issues with turbo boost, and other engine problems. When a car enters limp mode the process for bypassing it is similar to reduced engine power. By design, limp mode helps vehicles make it to a home or repair shop without causing further damage.

How to Check for Reduced Engine Power?

If you want to check for reduced engine power there are a few ways you can do so. First, you can use an engine scanner to scan your vehicle’s ECU. These are called OBD2 scanners, which are used to read codes from a vehicle’s computer. 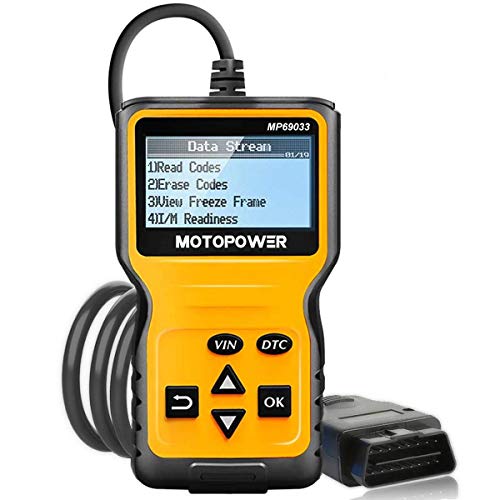 MOTOPOWER MP69033 Car OBD2 Scanner
$25.00
Buy Now
We earn a commission if you make a purchase, at no additional cost to you.

When there is an issue with a vehicle, like a check engine light, the ECU creates a code. With an OBD2 scanner, you can check for the reason a vehicle is in reduced engine power mode or limp mode.

You can also tell if your vehicle is in reduced engine power mode or limp mode by trying to accelerate. If the vehicle does not accelerate normally, there is a good chance it’s in limp mode.

Reduced engine power and limp mode can be caused by things like a faulty clutch, bad wiring, and even worn-out sensors. We’re going to take you through several of the reduced engine power causes and offer solutions for how to overcome them.

Some vehicles have manual clutches and even some automatic cars have clutch systems. Clutches are designed with many plates, discs, and various safety components. In non-electric vehicles, the clutch connects to the engine and transmission.

When the clutch is engaged, the engine is disconnected from the transmission. Then, a gear is selected and the clutch pedal goes back to its original position; this connects the engine to the desired gear.

Automatic vehicles with clutches do this automatically (hence the name) but manual cars leave discretion and gear choice up to the driver.

If a clutch begins to fail, drivers will notice that acceleration will be reduced. There are many reasons a clutch can fail and some are more likely to cause reduced engine power mode than others.

Some common things to look out for are a motor that’s lugging, clutch slippage, and the clutch not smoothly connecting the engine to gears.

Any of these problems can create a code that leads to limp more or reduced engine power.

Cars have many harnesses and connectors that hold things in place. When we refer to connectors, we’re using an all-encompassing term for wires, harnesses, belts, and gaskets.

If a modern vehicle has faulty connections it will cause the ECU to create a code that limits engine power. For GM vehicles this is reduced engine power mode and for non-GM vehicles, this becomes limp mode.

Modern cars use a central computer (ECU) that uses data from sensors (like a Mass airflow sensor) to control the power output of a vehicle. When these sensors become damaged the engine can perform with less efficiency, which reduces engine power.

Furthermore, bad sensors can cause a car to enter limp mode or reduced engine power mode. If sensors are too damaged for the ECU to get a reading, the car won’t have much power.

How to Bypass Reduced Engine Power

It’s less likely that a clutch will malfunction on a vehicle with an automatic transmission. On vehicles with a manual transmission, however, the clutch is a wear item.

A wear item is designed to perform well but they wear down over long periods. For example, the clutch begins to underperform after between 70,000 and 100,000 miles on most vehicles. If the clutch is wearing down it’s important to have it replaced by a professional.

A worn clutch will not engage with the engine properly or it can cause your vehicle to not start.

Faulty connections will cause a vehicle to lose power and performance, and can result in limp mode or reduced engine power mode being triggered. In most cases, you’ll feel a bad connection harness because the vehicle will be harder to control.

Checking the connections is the best way to ensure that reduced engine power mode is being caused by weak connections.

The best places to start are the transmission, belts, and engine harnesses. If you can’t identify these areas on your vehicle, you can work with a mechanic or reference the owner’s manual.

Most vehicles have a mass airflow sensor and an o2 sensor. You can bypass these sensors by using a dummy sensor or having the sensor replaced.

We always recommend replacing the sensors to prevent problems from occurring in the future. Another method of bypassing sensors is to use an OBD2 scanner to turn off the error code from faulty sensors.

Every non-electric vehicle needs one by law, so not having one can get you in a lot of trouble. That said, catalytic converters can reduce your engine’s power if they’re faulty and lead to a check engine light if they’re missing.

You can also bypass the issue by removing the catalytic converter but you’ll fail to pass inspection.

The electrical control unit (ECU) is the brain of modern automobiles. Almost every vehicle has an ECU and it makes sure your vehicle is running properly and efficiently.

When there is an issue with the vehicle the ECU can force a car into reduced engine power mode or limp mode. You can bypass the ECU by using an OBD2 scanner, which can remove error codes from the ECU. We recommend against doing this because it makes it harder for technicians to identify what’s wrong with the vehicle.

For serious problems, always work with a professional to prevent future problems. Most vehicles in limp mode or reduced engine power mode have enough power to make it to a repair shop. You can also have vehicles towed.

Below are some of the most common questions regarding reduced engine power.

How do You Bypass Reduced Engine Power?

Does Low Oil Cause Engine Power to Reduce?

If your vehicle is low on oil it won’t perform well. A drop in oil pressure can cause vehicles to experience a decline in performance.

Having low oil also causes parts of the vehicle to become worn down rapidly. Some common signs of low oil include reduced engine power, a drop in fuel economy, and engine stalling (turning off abruptly).

Can a Timing Chain Cause Reduced Engine Performance?

A timing chain can cause a reduction in engine performance. A faulty timing chain can also cause a drop in fuel efficiency and decrease acceleration. Still, timing chain problems are not correlated to limp mode or the reduced engine power light. This is a separate issue and needs to be addressed as such.

Understanding why your engine loses power is a great place to start and can help you bypass the problem. You can bypass reduced engine power yourself on many vehicles but you might need professional help if it’s a serious issue like the catalytic converter. On the other hand, we recommend getting your hands dirty if it’s just a bad sensor because these can be replaced without automotive skill.